These structures probably look the same wherever you go in the world. Somewhere between a cheap motel and a road side diner, these one story buildings sprung up everywhere in Finland in the 70’s and 80’s. And because we didn’t have any money back then their colour is uniformly best described as weathered concrete while – just as uniformly! – the low hanging roofs are of the cheapest brown sheet metal. These buildings always sit in the middle of sleepy suburban neighbourhoods often adjacent to parks (like this one), market squares or some other open space. Recently, wherever they have some money in the community, they’ve started to tear down these buildings in favour of something, if not prettier, then at least a little more modern looking.

This wasn’t the case with our first tour stop after the summer break, the Hard Rock House in Helsinki, Roihuvuori, though. At the same time though, to their credit, the owners had gone out of their way to make the place more welcoming. A self-built (probably) year-around terrace sat in front of the building where you could definitely fancy yourself spending an hour or two on a lazy summer afternoon if these were your neck of the woods. Inside, the wall panels and the bar instantly transported you to a fairly well run British pub that’d seen some action through the years. At the other end of the room we were playing stood a massive full-length pool table, undoubtedly the pride and joy of the place with its turquoise velour finish. Our bass player Tomppa managed to sneak a few games against the local pool shark during the opening band.

Initially though, it was only Tuukka and me who pulled up for load-in in the late afternoon. The other guys’d said they’d only be able to make it there half an hour before stage time (although Tomppa’s rehearsal with another band of his fell through and so he was able to come shoot some pool) and seeing as there was not going to be any kind of soundcheck – just a quick line check right before our set – we’d decided to just go with the backline gear of the house. So the only thing we really needed to test out was Tuukka’s effects board. The staff greeted us warmly and since we were the first members of any of the three bands playing that night, they let us run our quick check.

After saying hi to the guys and gal in the other bands who started to trickle in, Tuukka and me headed over to a nearby mall that promised to harbour a couple of pizzeria/kebab places. Yes, you need to know that in Finland – for whatever unimaginable reason – Italian and Turkish fast food have merged an unholy alliance and will be found under the same roof, at least if you’re looking for either food on a budget. Without fail, if a place sells just one and not the other, the food’s always going to taste better. But in any suburb in Finland everyone goes into this kind of place expecting nothing less than to be able to order both. That was the kind of establishment that Tuukka and I ended up eating in. In fact – true story! – here’s a conversation I overheard in a downtown kebab place once – and mind you, in downtown Helsinki, because of all the hipsters and tourists, businesses are actually able to focus on just one product and make it taste like sweet heaven. Anyway, this is a real conversation between a cashier and customer that I overheard:

”What do you mean, only kebab? You’ve got chicken, pita and… You gotta have pizza, right? Everyone has pizza.”

”But how can you advertise something that you don’t sell?

”Outside. It says ’döner’ outside.”

”What do you mean? I’ve had numerous döner pizzas in my life!”

”And you can’t make me a döner pizza?”

”No, Sir. We can make you a pita döner or a dürum döner if you’re looking for something with a bread-like quality to accompany your döner.”

And before the cashier could reply the customer had stormed out. In true Finnish fashion all of the seated guests had paused munching their whichever Turkish delight and listened in on the conversation. After they’d all watched the unhappy pizza seeker storm out they turned to look at the cashier in silence. The cashier knew better than to engage in banter with his Finnish audience and instead just threw his arms in the air and looking rather bored shouted something in Turkish to his co-workers in the kitchen that couldn’t be anything far from ”these people and their pizzas!” It seems like it wasn’t the first nor the last time this had happened.

Tuukka over his kebab and fries and me over my platter of just the latter shot the shit for probably close to an hour until it was time to get back to our place of residence for tonight to catch the opening band Motion in the Ocean who were playing their first gig ever. Before their set though I bumped into Annika from Hamburg who’d caught our very first gig at the 2017 Night of the Arts festival in downtown Helsinki. She’d brought her friend Valentine (”Hi, Valentine!”) from Paris along, so all of a sudden with all of these culinary experiences and people converging on this British pub-looking establishment, the evening was suddenly looking like an all-out pan-European extravaganza! We really should’ve opened the night with Charpentier’s Te Deum, come to think of it. That’s the opening fanfare of the Eurovision Song Contest, in case you’re wondering. I realize suddenly, high brow humour probably doesn’t become me.

Instead we opened with Ugly which is just the perfect right-in-your-face kind of opening song when you’re playing to a bunch of people who’ve never heard you before. Forget fanciful intro tapes and slow building openers – people only want to know what you’re about and then decide if they want to stay or not. Lucky for us, everyone decided to stay and have a listen to our set. 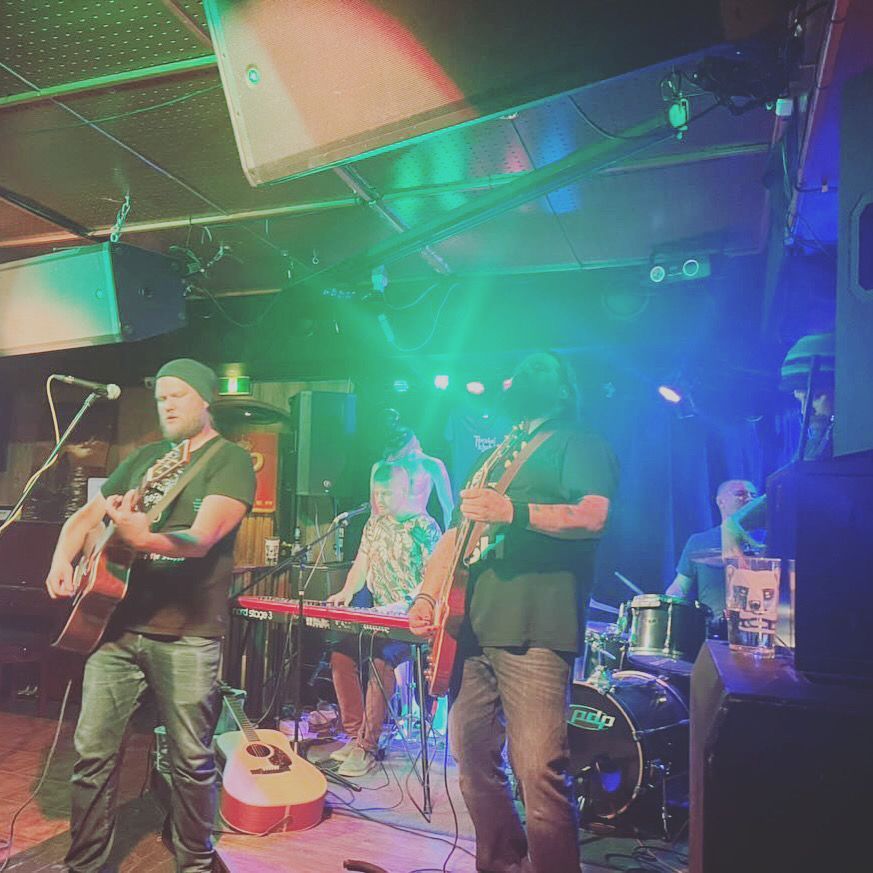 I don’t know if you can tell from the picture, but the stage wasn’t big enough to hold all of us, so I casually set up my microphone right next to the first audience table. In the middle of doing so I bumped into my old friend Maquée who – amongst other wonderful things – plays keyboards on the studio version of A Man With No Dance. As much as you always want to reach new people with your shows it’s just as great to see familiar faces again. Never mind one of my oldest pals that I’ve known since childhood and have played in my first band with! Anyway, he gave me a thumbs up and that usual grin of his and provided with me with a couple of photos from the gig afterwards, so show him some love!

The crowd was great for a Thursday night and the gig was over in a flash. Really loved seeing how progressively through the show everyone including the bar staff got more and more into it. Usually the hardest people to please are the folks behind the bar because they stand there pouring drinks day in and day out to the tune of blasting heavy metal, scorching punk and chest-obliterating hip hop beats. They’ve heard it all before and they don’t have any reason to give a fuck about any of the bands that come around. So to have people dancing and jamming along to our songs that they’ve not heard before is a great reminder of why any of us do this in the first place. Oh, and speaking of never having heard our songs – remember Valentine? From Paris? Turns out she hadn’t heard our music before the gig either and got her first impression of us right there live. She said it’s the best way to be introduced to a band and I couldn’t agree more. I vividly remember going to see Band of Skulls at a festival in Germany not knowing what to expect and being completely blown away by their sound, energy and – most importantly – their songs. Doesn’t matter which knobs you twiddle with in the studio, there’s just no way a band is ever going to sound as good on record as they do live. That is, if you’re any kind of good as a live band. And according to Valentine we are. And I’ve made a point out of never arguing with a French woman so… d’accord!